Long before becoming a museum curator, author Jan Krulick-Belin curated memories, photographs, and mementos of her father who died when she was just six. Her mother rarely spoke about him again, until a year before her own death, when she gave Jan a box of one hundred love letters he had written her during World War II.

Love, Bill chronicles the true story of Krulick-Belin’s life-changing pilgrimage of the heart to find the father she thought she’d lost forever. The letters lead her on an extraordinary journey following her father’s actual footsteps during the war years, leading to unexpected discoveries from Morocco to Paris to upstate New York. She learns about her parents’ great love story, about the war in North Africa, and about the fate of the Jews in Morocco, Germany, and France.

Love, Bill offers a testament to the enduring power of determination, love, family, and the unbreakable bond between fathers and daughters.

“There’s a bit of everyone’s family in this moving and heartwarming journey. I know that Jan has been hungering to write this story her whole life, and I’m happy to report: she done good!”
— Paul Reiser, Actor, Author, and Comedian

“This remembrance, the result of extraordinary detective work, is a moving love letter from daughter to father but also a testament to the emotional significance of family legacy… poignant fusion of history and familial devotion… touching biography of a World War II soldier that unfolds like a mystery.”
— Kirkus Reviews

“Krulick-Belin puts her memories into words beautifully… the narration is detailed and descriptive, and she takes readers on an unexpected and remarkable journey… the amazing letters, the spiritual undertones, the Jewish connection, and lastly, the descriptions of World War II, make the book an amazing read.”
— Readers’ Favorite

“Seemingly ordinary, yet eloquent love letters sent to a GI’s future wife during wartime, proved to be a never-imagined godsend for their yet-to-be-born daughter. Not only did they lead Jan on a quest to bond with the father she lost at a young age, but they offer us a deeper insight into every soldier’s struggle amidst the chaos of war to hold on to his dream of returning to the life and loves he left behind. It’s a story that captured my heart… a marvelous work.”
— Captain Louis Matjasko, USN Retired; Executive Director, Circle of Change Veterans Dog Program

“Using her keen curatorial eye and art historian’s sleuthing abilities, [Krulick-Belin] discovered the father she barely knew, and in turn, her own place in the world. We are privileged to travel alongside her on this odyssey she so generously shares.”
— Marissa Roth, Pulitzer Prize winning Photojournalist, Documentary Photographer, and Writer

“Krulick-Belin does an impressive job of placing her father’s experiences in North Africa in historical perspective, a theatre of WWII that is less known or understood… She shines a spotlight on her father’s Jewish identity…and his desire to enlist in the struggle against Nazi Germany.”
— Lawrence Bell, Executive Director, Arizona Jewish Historical Society 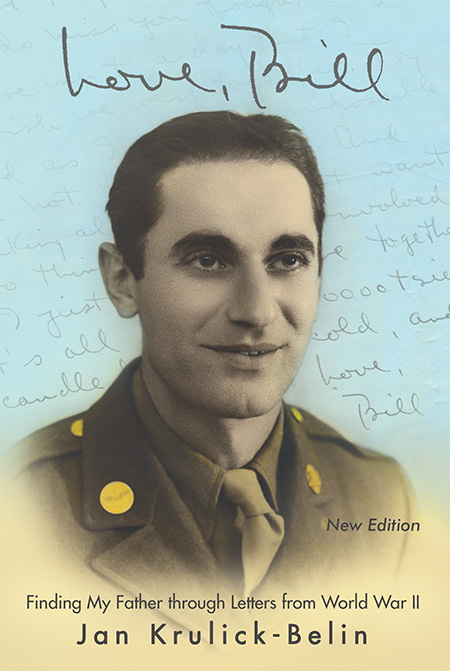